There are 8 positions to play in the game of Wealth. Which position is more suited to your personality? 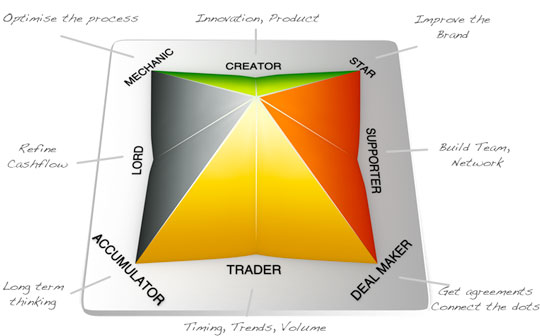 Creators are big picture thinkers with an awesome ability to get things started, although they tend to be shocking when it comes to finishing things. Their drive and momentum can be exhausting for others around them, and they themselves very rarely know how to use their drive and intuition to maximum effect. It's common for a creator to flit from one project or opportunity to the next...without ever benefiting from the fruit of their efforts. Examples of successful creators include Steve Jobs, JK Rowling and Richard Branson.

Stars are aware of the strength of their personality, and often use it to their advantage without realizing the negative impact it can have on those around them. As a star increases their ability to shine, they can often get burnt out with extreme demands on their time. Increased success frequently means greater stress, and an inability to capitalize on their stardom in a sustainable way. Examples of Stars who have found their natural path include Oprah Winfrey, Martha Stewart (However, Martha Stewart didn't know she'd found her path and deviated from it...it must have been a painful lesson) and Anthony Robbins.

Using systems and processes, a Mechanic has the ability to control and manage people without necessarily having any charismatic leadership qualities. Mechanics endure and tend to rely on duplication and replication, and love to challenge the status quo. Mechanics may get caught up in the detail, at the expense of the big picture. Successful mechanics include Ray Kroc and Sam Walton.

Lords look at the high profile entrepreneurs and stars of this world and wonder why on earth they would ever want to do what they do. Lords are rarely seen, yet rolling in cash, and often in control of natural resources and man made structures. They act slowly and certainly, which frustrates many around them, and inevitably these characteristics may be the source of many of their challenges when it comes to wealth creation. John D Rockefeller and J Paul Getty are two successful and well known Lords (who only became well known after they had achieved the status of being the richest people on earth).

Supporters have strong interpersonal skills and are great at building relationships but generally poor at knowing how to use their ability to create sustainable wealth in a way that's fun for them. They have little or no affinity for systems so it is easy for the value they create to be lost. Examples of supporters who have discovered the secrets to their profile are Meg Wittman and Jack Welch.

Many people have begun to fancy themselves as a trader, possibly as a result of the increased profile of online, retail and options trading. In reality, most people are not designed to be traders, which partially explains why most who try these things, lose their money. Their strength of operating at point blank range is also their weakness as they rarely plan out their big vision. George Soros has achieved great wealth through following his natural path as a trader without deviating.

Get agreements Connect the dots

Dealmakers are naturally great communicators, influencers and negotiators with a great sense of timing and patience. They can often run too hot and spread themselves too thin, losing credibility with their contacts in the process. Without a clear niche to best capitalize on their unique abilities, Deal Makers may not believe dealmaking to be a credible way to build wealth. Examples of successful dealmakers are Donald Trump and Rupert Murdoch.

The accumulator is the safest profile, and relies on a system to achieve incremental wealth growth. Many wealth seekers choose this approach but as it is also the slowest, they get itchy feet and move on before they achieve the success they hoped for. Many see accumulators as indecisive and procrastinators, and they often go unnoticed. Warren Buffet is possibly the world's most well known accumulator.