Take the Test Find out more

Almost everyone has done a personality test at one time. Often, you discover things you already knew about yourself - Extroverted or Introverted, Big Picture or Detail Orientated - Interesting yes, but how does it make a difference to your life?

Wealth Dynamics is the only personality test that tells you exactly what strategy you should follow to build wealth.

Of all the vastly different ideas, strategies, businesses and investments that you could pursue, Wealth Dynamics narrows it down for you ... precisely.

In all of history there have only ever been eight ways to create Wealth.

It might appear to most people that there are hundreds of ways, but in actuality there are ONLY eight!

These are the Eight Ways to Create Wealth...

The basis of the Wealth Dynamics profiling system is a unique combination of Jungian psychometric testing (tests such as MBTI and DISC), natural laws found in Western physics (quantum mechanics, chaos theory) and significantly influenced by Chinese systems (I-Ching, Feng Shui). All of this applied to create a model which has 'change' built into it. After all, life is not static, it grows and evolves ... as do you within Wealth Dynamics. 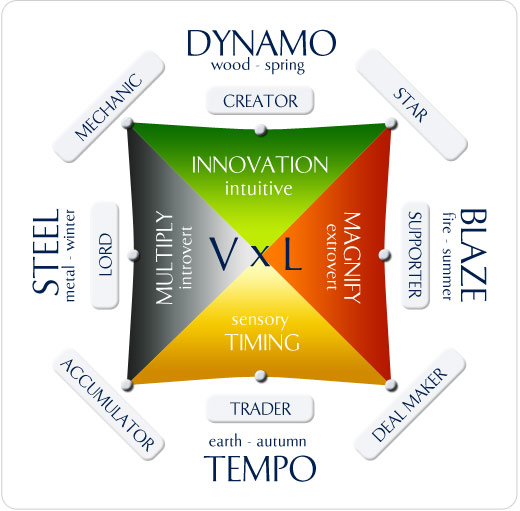 "If you are doing anything that feels like hard work, you are already doing the wrong thing"

Building Wealth isn't about fighting yourself and trying to suppress your natural behaviour. If that were true, the wealthiest people on the planet would have quit when they first became millionaires rather than still playing the game their whole life.

The real trick to building wealth is to maximise your natural strengths and the things you feel are fun. That way you will always have the energy and the drive to stick through the challenges (and EVERY wealth strategy throws up challenges that are designed to weed out the people who are just chasing the money).

How does Wealth Dynamics Maximise My Strengths?

Wealth Dynamics is a wealth profiling system which uses a psychometric test to assess your personality, strengths, productivity, values and group behaviour, to determine your most natural way to build wealth.

Up until now the only way to discover which path is right for you, has been through the process of trial and error.
You make your money in business, then lose it all on the stock market... You spend years earning money working for someone else, and then lose it all starting your own business...

Wealth Dynamics was developed to take the Trial & Error out of the process.
It provides you with a map to guide you on Your Path to Wealth, allowing you to identify which strategies, and six steps you need to be focusing on, learning about, and taking action on.

What is covered in the Wealth Dynamics Profile Results 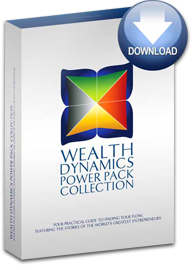 All included when you take the test.

Why does this work?

Wealth Dynamics works because every person has a limited amount of time and can only focus on a few areas of business at once.

If a hollywood actor (Star) also tried to be a great agent (Deal Maker) they would most likely fail at both things, why? because they have split their time between two disciplines that each require focus and commitment.

People don't want to do business with people who seem to be unfocused and average at many things - they want to work with people who are brilliant at their chosen craft.

Wealth Dynamics helps you to get that focus and better, yet it helps you to choose the thing that you are naturally more likely to succeed at ... and enjoy!

You make more money, have more enjoyment and fulfillment and ultimately get recognised as being a leader in your chosen field.

What makes you so sure?

To date, over 20,000 entrepreneurs in over 20 countries have taken the test and discovered their profile. The overwhelming feedback from people at all levels of success tell us that knowing "Their Profile" has given them tremendous clarity, direction and a better understanding of themselves and others.

It only takes 20 minutes, and remember there are no right or wrong answers ... only what is true for you!

Take the test and discover your profile today. We will email you everything you need to take the test, so you can choose to complete it now (recommended), or complete it when you have 20 minutes of un-interrupted time.

Almost everyone has done a personality test at one time. Often, you discover things you already knew about yourself - Extroverted or Introverted, Big Picture or Detail Orientated - Interesting yes, but how does it make a difference to your life?